As an esthetician, hyperpigmentation will be the most common and troublesome skin condition you’ll treat. Without corrective skin care treatment and lightening agents, hyperpigmentation can be difficult to treat. It may take months or even years for the condition to improve. To effectively treat hyperpigmentation of skin of color, it is important to include lightening products or agents into your treatment plan. These lightening agents can be found in professional and prescription skin care products. These agents are applied to the skin once or twice daily to lighten it over time. Lightening agents and treatments for skin of color can be used individually or as part of a combination therapy method to get rapid results.

How Do Lightening Agents Work?

Lightening agents can slow down melanin production either in one way or in many different ways. Melanin synthesis refers to the conversion of tyrosine from DOPA and dopaquinone using an enzyme called Tyrosinase. Below are some details about the actions of lightening agents.

Mimic tyrosine. Lightening ingredients act as a mimic of tyrosine, essentially keeping tyrosinase too busy to produce as much melanin as before. This is the case for hydroquinone, mequinol, azelaic acid, arbutin and licorice extract.

Prevent tyrosinase. Lightening ingredients can also block off the important copper ions in tyrosinase, preventing the enzyme from working, as is the case of kojic acid. N-acetylglucosamine slows down the production of tyrosinase enzyme, meanwhile vitamin C (ascorbic acid) undoes the reaction of tyrosinase.

Slow melanonosomes. In the case of arbutin and its derivatives, the maturation of melanosomes (pigment producing organelles) is slowed.

Preventing transport. Ingredients like soy, niacinamide and retinoids prevent melanin pigment from traveling from the melanocytes where it’s made to the keratinocyte skin cells.

This lightening agent, which is most often used to treat hyperpigmentation among clients of color, is the most well-known and studied. It is not available in all countries. However, it can be purchased in both prescription and non-prescription strengths. Hydroquinone, the only approved product by the U.S. Food and Drug Administration for the treatment of hyperpigmentation, has been extensively tested and proven effective. It reduces the activity of tyrosinase which is an enzyme that produces new melanin. This makes it more effective than other lightening agents.

Hydroquinone mimics tyrosine and keeps tyrosinase busy enough to make as much melanin. OTC and 2% hydroquinone concentrations are safe for all skin types. Although higher levels can still be effective, they are more likely to cause adverse reactions in people with darker skin. Most prescription-strength hydroquinone formulations contain 3-4%, but concentrations as high as 10% may be available through compounding pharmacies. It is commonly combined with other actives, such as tretinoin or retinol, vitamin A, vitamin C, or glycolic acid, when prescribed by a doctor.

Side effects may include itching, dry skin, itching, allergic reactions, mild contact dermatitis, and skin dryness. It can cause hypopigmentation in severe cases and post-inflammatory hyperpigmentation.

Hydroquinone can now be purchased only through prescriptions. This makes it difficult for estheticians not to use it in their treatments without consulting a doctor. There are other options.

This is a prescription alternative to hydroquinone. It’s also known as methoxyphenol, hydroquinone monomethyl ether and p-hydroxyanisole. It is similar to hydroquinone in that it mimics tyrosine and decreases tyrosinase’s ability to make melanin pigment. Mequinol usually comes at a concentration of 2%, sometimes in combination with 0.01% tretinoin and vitamin C to enhance penetration. It has been found to be as effective as hydroquinone and less irritating, but can sometimes temporarily cause post-inflammatory hyperpigmentation.

Arbutin has been called a “naturally hydroquinone”, as its structure is very similar to hydroquinone. It can be found in bearberry leaf extracts, as well as in blueberry and cranberry leaf extracts. Arbutin gradually becomes hydroquinone. This acts as a tyrosine imitator to slow down melanin production. It can also affect the maturation and production of melanin-producing organelles, called melanosomes. It slowly converts to hydroquinone by skin enzymes, resulting in a slow-release effect. It is combined with retinoid, alphahydroxy acid, and antioxidants to be the most effective hydroquinone-free dark-spot remover. Arbutin is most commonly used at 5% strength. However, there are higher concentrations.

Retinoids are some of the most popular and effective treatments for reducing sun damage and dark spots. Derivatives of vitamin A, examples include tretinoin, adapalene, tazarotene and isotretinoin, as well as retinol, available OTC. Clinical studies have shown that retinoids (including retinoic acid, retinol and retinyl palmitate) help reduce uneven pigmentation while strengthening elastin fibers and supporting structural collagen. This helps prevent breakouts and signs of aging, while acting as a penetration enhancer for other treatments. Retinoids can work in multiple ways to reduce pigmentation, including increasing skin turnover, interfering with transfer of melanin to the skin, reducing the amount of tyrosinase produced in the skin and dispersing melanin.

Azelaic acid is a prescription-only acne treatment in many countries. It is slightly milder than hydroquinone, but in combination with retinoids has been as effective as 4% hydroquinone, with less side effects. It interferes with tyrosinase activity as a tyrosine mimic and suppresses and kills abnormal melanocytes. It can be used in 15-20%, sometimes combined with glycolic acid. Azelaic acid is known for the lack of side effects with its use – the main side effects are mild stinging and redness.

Kojic acid is produced by bacteria in the fermentation of rice in the manufacture of sake (Japanese wine). A derivative of kojic acid, kojyl-APPA has also been investigated for its whitening effect and improved skin penetration. Kojic acid binds to copper in tyrosinase, preventing it from performing its role in the production of melanin. It is usually found at 1-4% concentrations, often in combination with hydroquinone, retinoids and glycolic acid. 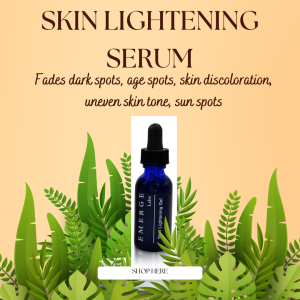 Licorice root has long been used for its natural “skin lightening” effects. It contains high amounts of compounds, including glycyrrhizin, glabridin and liquiritin that also helps block tyrosinase enzymes, which contribute to skin hyperpigment changes. It can also help reduce collagen loss and improve the skin’s ability to absorb other ingredients.

Vitamin C, also known as ascorbic acid, is an ingredient in many skin care products, due to its potent antioxidant activity. However, it is very unstable and is usually combined with other ingredients. Ascorbic acid turns dopaquinone back into L-DOPA, undoing the reaction that tyrosinase does. Ascorbic acid is typically found in 5-10% concentrations, and has an excellent safety profile with much less irritating potential than many other lightening agents.

N-acetylglucosamine is a sugar found throughout nature and in the body, and it is a precursor of hyaluronic acid. It slows down the production of tyrosinase enzymes, essential in the synthesis of melanin. Concentrations of 2% N-acetylglucosamine have been found to improve pigmentation in clinical studies and are frequently used in conjunction with niacinamide. There has been mild to moderate skin irritation in some cases.

Niacinamide, also known as vitamin B3, is found in many plants. It is an antioxidant and is very stable. Niacinamide inhibits transfer of pigment to the skin. The typical concentration of 2-5% has been found to be effective in reducing hyperpigmentation in several studies. However, niacinamide is usually combined with other agents. Some skin irritation can occur.

Consider side effects when choosing the right type of lightening agent to use for your clients. Combining the two, or perhaps only using prescription-based lightening agents for a short time, can produce faster results without irritation or complications. When performing facial modalities or implementing treatment protocols, make sure you recommend a home care program with clear instructions on how to use lightening agent on a daily basis for clients of color.